Born 27th May 1944 in Mill Hill, London, Rod grew up in the same area as Peter Pye and Martin Murray. He was forming bands from as early as his school days including "The Bumblies" with Peter Pye and then "The Skylarks", also with Peter.
Then at the end of 1964 when Peter Pye replaced Martin Murray in The Honeycombs Rod went on to become the lead guitarist with Martin's new project "The Lemmings", releasing two singles,
Out Of My Mind/My Little Girl, 7N 15837 April 1965 and
You Can't Blame Me For Trying/Bring Your Heart With You, 7N 15899 July 1965
The other members were, Vick Long lead vocals, Chris Spooner bass, Barry Hebbon drums.

Then in April 1966 Rod joined The Honeycombs when three members, Denis D'Ell, Alan Ward, and Peter Pye left. he replaced Alan Ward on lead guitar, along with Colin Boyd lead vocals, and Eddie Spence on organ. The band's style changed somewhat from the neat cut matching suits and short haircuts, preferring to wear more eclectic psychedelic clothing. Rod had an eccentric style, wearing a bowler hat adorned with bumble bees, and black round framed glasses. They toured extensively, mostly abroad and Rod tells me that they were often quite badly behaved. He recalls one occasion on tour abroad when after a gig they unwound in the traditional way with a few beers and then while exploring the town, somewhat the worse for drink, Rod swung round a parking meter which shifted in the ground. Obviously they then began trying to lift it and succeeded in lifting the meter clear out of the ground, whereupon it overbalanced and smashed open on the pavement. Within a very short space of time they were held at gunpoint by the police and marched off to some cells. Once behind bars they began to sober up and asked for water. A bucket was brought and some tin mugs which they poked through the bars, dipped in the bucket and drank. In the morning a cleaner came and mopped the floors using the same bucket they had previously drunk from.

After The Honeycombs broke up in 1967 following the death of Joe Meek, he again teamed up with Martin Murray in The College Boys releasing Good Times / San Antonio Rose Pye 7N 17294 Mar 1967. 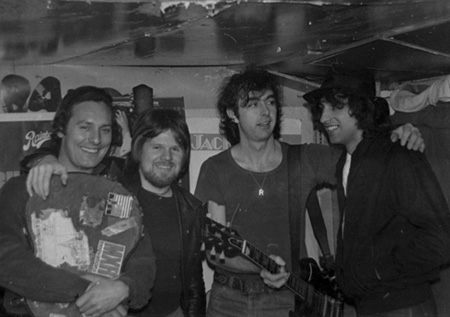 zarabanda circa 1970 with Denis D'Ell (left) and Rod Butler second from right holding the SG. (He is left handed).

Rod's next project was a band called "Bang", which was a rock three piece with himself on vocals and guitar. They played pubs and clubs to frenetic audiences, but Rod knew that his vocals were not as good as his guitar work and after a while he went with some trepidation to ask Denis D'Ell if he would consider joining the band.

To Rod's surprise Denis jumped at the chance. With a new drummer as well the band needed a new name. Denis was interested in all things Mexican and one suggestion was Zarabanda which stuck. Rod wrote a stack of great songs which were signed over to the publishing company but nothing came of it. There were talks with an American record company but as often happens the idea just never quite took off despite extensive touring to enthusiastic and growing audiences.

During the mid nineteen-seventies Rod became interested in karate. Having taken his kids to classes and watched he ended up starting himself. Then he discovered that Laurie Dalziel (Denis' brother) was already a brown belt, so they would get together and in Rod's own words, Laurie would knock the hell out of him.

Rod's last fling with music before karate took over his life was appearing on Top Of The Pops, with Violinski. The band was a side project and wasn't expected to tour. The members were not even always available for promotional work etc so Rod got the call to stand in on Top Of The Pops, and in other promotional shoots. He says that despite the fact that everything was mimed on the show, he still played the guitar as if it was live.
He can be seen in this TOTP2 video from March 1979. The camera zooms in on him around 10 seconds, playing a red Gibson SG, left handed.

Since then he has focused more on the martial arts. He published a book Keinosuke Enoeda - Tiger of Shotokan Karate