Born 7th October 1939 (according to the article it is 1941 but this was apparently a misprint) in the City of London to parents Essie and Ivor Murray he had a brother Derek and Sister Rene. They moved to 25 Woodford Green Avenue, and he went to Sydney Burnell Secondary Modern (now Higham's Park School) where both John and Honey Lantree also went. He was in the same year as John and so knew him before forming the Sheratons.

Although Martin had no formal musical education he was determined to be involved in the music business. He got his first guitar when he was eight and taught himself to play. According to Martin he was just fifteen when he formed his first band. He and some friends formed a skiffle group called The Black Rebels (so called because they all wore black leather jeans and jackets) Martin was on vocals, Neville Bird played guitar, (not sure about the rest of the line up). They would busk in coffee shops and on the central line trains out of Woodford and then set up open guitar cases at central london stations before returning home entertaining passengers on the train.

The band however broke up when some of the members moved away leaving post war prefab houses and moving to new towns such as Harlow.

He also worked variously as a chauffeur and as a hairdresser running a salon in Hackney where Honey, then his girlfriend, also worked. But music was his passion and his next group The Sheratons was to be the beginning of something big.

The drummer of the Sheratons was an Indian guy named Chris, but his parents wanted him to quit music and concentrate on his education. His replacement was Honey Lantree, and her brother John joined on bass. Alan Ward and Denis D'Ell auditioned in a church hall in Chingford and the Sheratons line up was complete.

Martin was naive enough to think that people would just accept Honey for her drumming abilities. However, inevitably she attracted much attention, and among those drawn to the regular gigs at the Mildmay Tavern were young songwriters Ken Howard and Alan Blaikley, who would later become one of the most successful songwriting teams in the country. They had several songs including Have I The Right, and this song was then presented to Joe Meek.

Martin already knew Joe Meek by association, and when he thought the band were good enough he persuaded Joe to give them an audition. With the added and unexpected boost of a great song by two unknown songwriters the stage was set for an amazing pop debut. Having signed to PYE and changed the name of the band to The Honeycombs, the first single Have I The Right was released.
It took several weeks for the single to makes any progress in the charts and according to at least one source the BBC had actually stopped playing it when it started to storm up the charts backed by pirate radio stations, such as Caroline, and Luxembourg.
At this time there was a problem with the contract the band had with PYE which gave the band an opportunity to renegotiate. This gave them great leverage and they got an outstandingly good deal for the times. 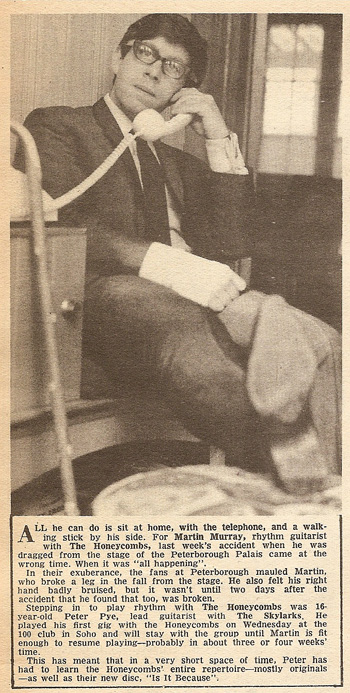 Then early in October 1964 at a gig in Peterborough, Martin was dragged off stage by over enthusiastic fans and broke his leg and hand. An urgent replacement was found in the form of 16 year old Peter Pye a family friend and one of Martin's guitar students. He quickly learned the songs (they only played very short sets as part of a large line up so it wasn't quite the major task it might seem) His first gig was at the 100 club in London's Soho, and covered for Martin for several weeks, although Martin still did TV appearances where it was usual to mime to a backing track.

Towards the end of 1964 Martin was getting frustrated with the rest of the band who were becoming starstruck. He often had to practically drag them to shows and TV appearances. He gave them an ultimatum that if they did act more professionally he would wind up the band, but then they called on Peter Pye and asked him to take over if Martin did leave.
When Martin found out he asked Peter not to do this as a friend but of course Peter could not resist joining a world class act as a full time member. This caused a rift which was never healed.

Martin then did leave the Honeycombs at the end of 1964 but in those five short months they had already had most of their success, at least at home.
Even their second biggest single That's The Way although not released until August 1965 had already been recorded and featured on the debut album.
In truth it is fair to say that Martin was the leading light in the band. He arranged the songs, he took most of the decisions, and after he left, the band lost its direction. The second album only featured four songs by managers Howard and Blaikley whereas the first album had only three songs that were written by anyone else. Of which Martin himself was one with Leslie Ann, Joe Meek wrote She's Too Way Out and the third was the broadway standard It Ain't Necessarily So which benefited from Martin's arrangement.

Unfortunately he was never able to recreate the magic of The Honeycombs. It is often very hard for any band to have a huge hit with their first single because everything else is compared to that benchmark. It must be even harder starting from scratch.
Martin's next band was The Lemmings, which released two singles with PYE. Out Of My Mind/My Little Girl, 7N 15837 April 1965 You Can't Blame Me For Trying/Bring Your Heart With You, 7N 15899 July 1965 The rest of the band were, Vick Long lead vocals, Chris Spooner bass, Barry Hebbon drums, and Rod Butler lead guitar. Rod Butler later joined the New Honeycombs in April 1966.

His next group was The College Boys releasing Good Times/San Antonio Rose PYE 7N.17294 in March 1967
(according to rokpool.com honeycombs discography. However according to 45cat.com The College Boys appear to have also released a single in 1963 on the Blue Beat label BB 202 Love Is A Treasure/Someone Will Be There so it appears that either Martin joined an existing band, or there were two bands with the same name. Further evidence is elusive.)

Martin then went into the other side of music, producing and managing bands probably among the first was The Alexander Patton band, which according to Walthamstow Memories were active from 1964 - 1967. 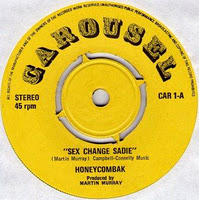 Dates unknown but presumably late sixties or early seventies. Several websites say 1971 Martin produced two singles on the Carousel label.
CAR 1 Sex Change Sadie/It's My Life is credited to "Honeycombak" and is a stomping track about a cross-dresser which you can hear in full HERE Both sides were written and produced by Martin Murray.

CAR 2 is by Gene Young Halfway to Paradise/Mary Jo. The flip side was written by Martin and published by Geobell music. Geobell was the publishing company of Geoff Bellamy who was the original rhythm guitarist with the Tornados but left due to ill health. He is also the father of Matt Bellamy, lead guitarist with rock band Muse. The A side written by Carole King and Gerry Goffin was made famous in the UK by Billy Fury who took it to number 3 in 1961.

Later Martin ran a label called Stardust and released several more records. Initial source here
Star 001 15th Feb 1979 is also labeled as "In association with Syron records" and the promotional blurb was headed Syron Records (according to 45CAT) A side Love Slide Boogie B side Problem In The City by Satyr, both songs written by Steve D.C. 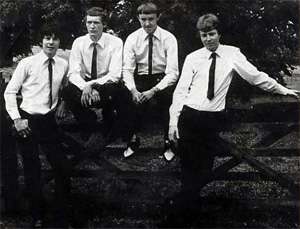 The Nightriders.
STR-1001 Oct 1979 The Nightriders, I Saw Her With Another Guy and London Town both written by Steve Seymour. The numbering system changed from Star 001 for some reason.
The Nightriders were, Steve Seymour guitar - Andrew Clark drums - Steve Peel vocals - Peter MacKender bass

STAR 1003 1980 Artist L.A. A side (?) B side Its My Life by Martin Murray presumably a cover of the earlier Honeycombak song.

In recent time Martin has rather sadly made a career out of wasting other musicians time and giving people false hope. With a guaranteed income from his pension and a small royalty check twice a year for "Have I The Right", Martin still holds on to a dream of performing live to big audiences with his version of The Honeycombs. However this dream is unlikely ever to be fulfilled as he keeps changing the line up and leaving a trail of angry musicians in his wake. If you ever get the chance to join Martin Murray's Honeycombs, I would recommend that you don't bother.