Anne Margot Lantree was born in Hayes Middlesex on 28th August 1943 later moving to Highams Park and going to school at Sydney Burnell Secondary Modern (Now Highams Park School, Handworth Avenue London E4)
She was a hairdresser working in Martin Murray's salon in Hackney before joining the Honeycombs. In the evenings Martin was teaching her to play guitar. The drummer in Martin's band used to leave his drum kit set up in the rehearsal space, and when by chance she had a bash at them she turned out to be surprisingly good. According to newspaper articles of the time it took Martin six months to persuade her to join the band although he recently recalled that she was thrilled to bits to be asked to join. 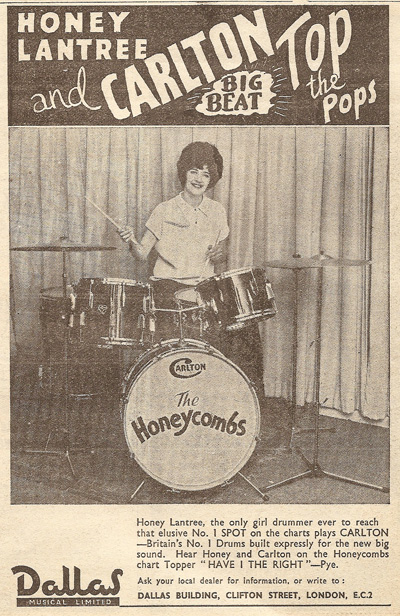 Honey had a custom drum kit made for her by Carlton drums.
Inevitably Honey became the focus of the group for Fleet Street hacks and casual fans. She was strikingly attractive with her fashionable hairstyle sparkling eyes and fine facial structure and she cut a dash in her specially tailored feminine versions of the boys suits and ties. But she could most definitely play the drums. NME journalist Richard Green wrote (23rd October 1965) "...Is It Because, did a lot of good to Allan(sic) Ward's reputation as a guitarist and - I am happy to say - proved that Honey can play the drums."

Honey was also an excellent singer duetting with Deni D'ell on their second biggest UK hit That's The Way and the delightful This Year Next Year. During live shows the drumming was taken over by Viv Prince formerly of The Pretty Things when she sang.

She was at number one in the charts on her twenty first birthday and her party was gatecrashed by record company executives.
With The Honeycombs she took part in countless TV appearances and toured all over the world continuing as The New Honeycombs until their final break up in 1967. 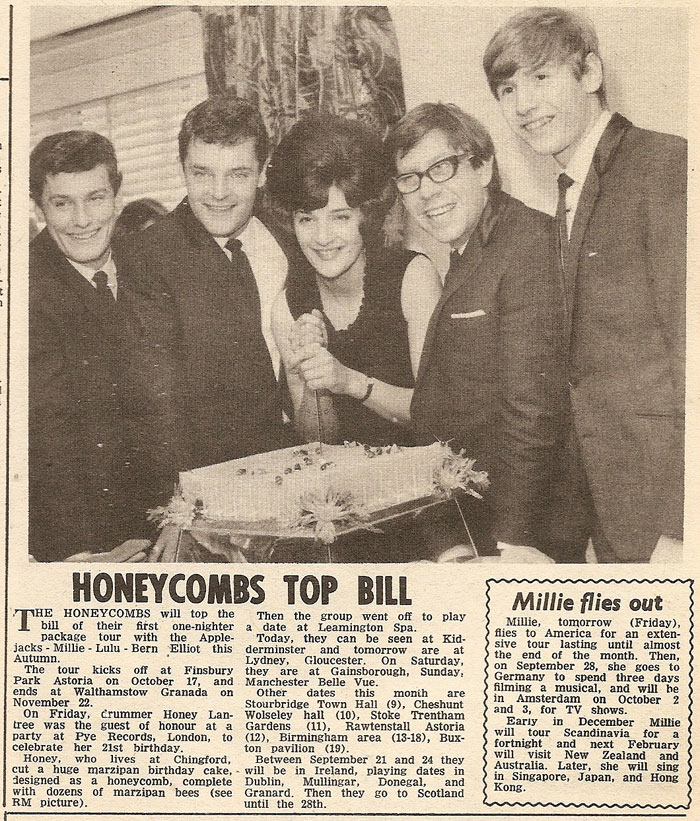 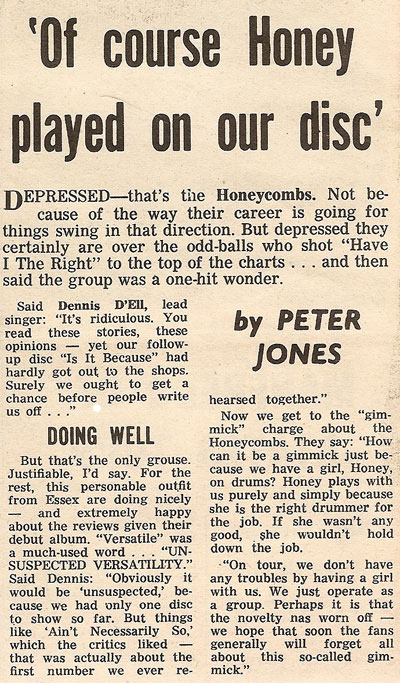 The lack of follow up success of The Honeycombs after the massive success of Have I The Right has been blamed on a number of things including foreign touring, and that the "music scene had moved on" but an article in Record Mirror on 17th October 1964 gives a bit of a clue. Denis D'Ell complains that many newspapers were dismissing the band as a one hit wonder when their second single had only just been released. The band also hotly defends Honey insisting that she did play on the record. So perhaps a more likely explanation was that the popular press had decided that this was a gimmick band with their pretty girl behind the drum kit who couldn't really play, and one good song was all they had. Some of the other reasons given ma have weight as well but the public perception of how the story should unfold may have been the biggest factor.

An attempt to form an all female band in 1967 was shelved when it was not possible to find enough talented female musicians. From the perspective of the 21st century this seems almost inconceivable but female pop musicians were a bit of a rarity in the sixties even if there were plenty of vocalists.

Along with Peter Pye, Denis D'Ell and her brother John she recorded a cover of Live and Let Die, for Future Legend Records.
Honey has been involved with the Joe Meek Appreciation Society and did an interview in 2008 for a film being made about Meek.

Honey Lantree at IMDB
Biography at All Music