Joined The Honeycombs along with Rod Butler, and Colin Boyd, around April 1966 following the departure of three of the MK II line up, and remained with the band until its break up in 1967

In the early seventies Spence was in a band called Ashley Ward Delegation with Paul Green on guitar who took over from Andy Powell who had left to join new band Wishbone Ash. According to Paul they shared a house in Croxley Green, and he recalls Eddie's girlfriend hitting him round the head with an iron. Tommy Ross was also in that band although he doesn't mention Eddy Spence in his recollections.

After Ashley Green Generation, Spence's next job was with Gordon Giltrap while other members of the band formed part of The Glitter Band. Giltrap's second album mentions Eddie Spence in the special thanks section, then he is credited as Keyboard player, along with Rod Edwards on the album "The Peacock Party" PVK Records - GIL 1 - 1979 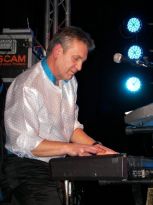 Eddy Spence photo from The Glitter Band website.
I found out that Eddie Spence is currently touring with The Glitter Band where he has been since 2008. (Its perhaps worth noting that this band should not be tarred with the same brush as their fleeting lead singer with the eponymous stage name)