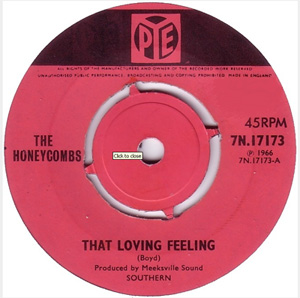 Real name, Colin Nicholas Nicol.
He was born 4th June 1946, Combe, Somerset. He joined The Honeycombs around the end of April 1966 replacing singer Denis D'Ell. Along with Rod Butler and Eddie Spence they joined remaining members Honey, and John Lantree and the band took on the name The New Honeycombs although this appears to have been very loosely applied since later singles still came out under the name The Honeycombs. As you can see from the record.
This last single released by the band featured an A side written by Colin Boyd, "That Loving Feeling" with the flip, another Meek song "Should A Man Cry?"

He then went on to join Honeybus, formed by Pete Dello and Ray Cane, along with Pete Kircher, and changed his name to Colin Hare.
Honeybus released an album "Story" in 1970 and a number of singles (see links) from 1967 to 1973, of which the best known is of course "I Can't Let Maggie Go".
Discogs lists seven singles, Wikipedia lists nine singles, 45CAt appears to show eleven. So take your pick.

In recent years Colin has revived Honeybus and has a website, here. although it does not appear to have been updated recently.